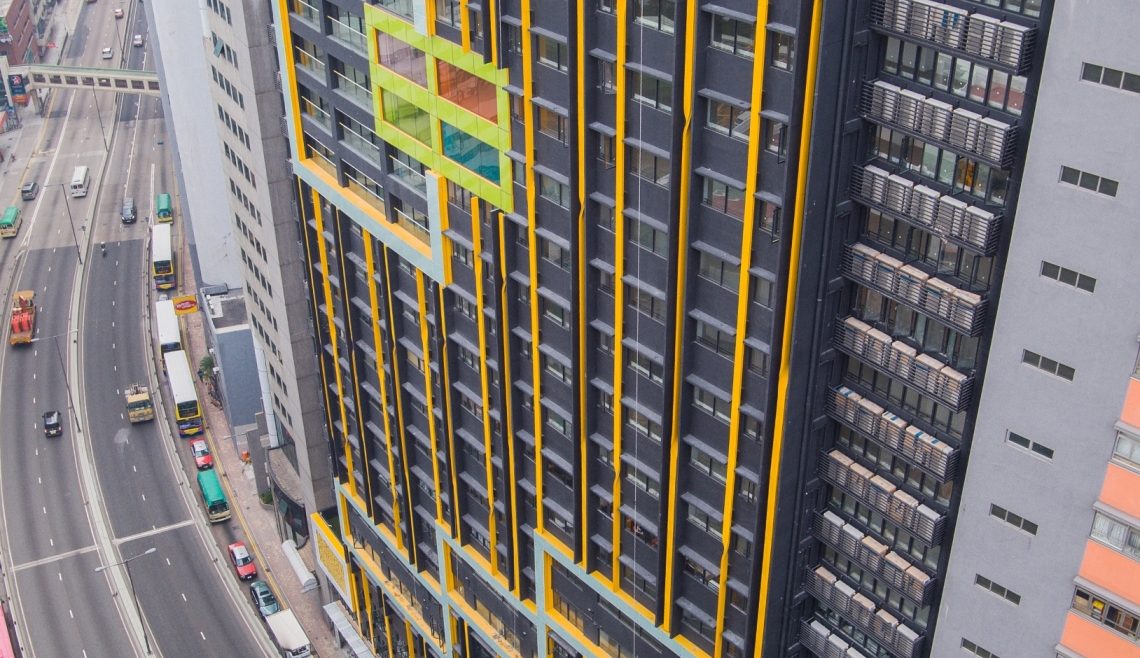 (26 January 2015, Hong Kong) Hip Shing Hong (Holdings) Company Limited (Hip Sing Hong) has successfully revitalized Good Prospect Building at 33–35 Wong Chuk Hang Road into a commercial building named ‘Genesis’. The rejuvenation of Genesis, which started in 2012, is the first industrial building in Wong Chuk Hang revitalized to a commercial building. The spirit of Genesis is not only about the renewal of building, but that of community building and work life balance.

Mr. David Fong, Managing Director of Hip Shing Hong (Holdings) Company Limited said, “The land that Genesis is sitting on was purchased from the Government in 1952 and today we are proud to witness the beginning of its 3rd life.  I would like to thank Mrs. Carrie Lam in pushing forward the Revitalization of Industrial Buildings measures in 2010 when she was Secretary for Development, releasing the energy of Hong Kong’s industrial assets that have been idling for years. Genesis has brought back the glory of Good Prospect Building and a lot of dear memories of Hong Kong.”

Mr. David Fong continued, “In revitalizing the building, Hip Shing Hong has not forgotten its fine tradition of community building and the calls from society and government. Starting with the founding of Aberdeen Kai Fong Association by my late grandfather Mr. Fong Shu Chuen more than 60-years ago to help the underprivileged to my father Mr. Fong Yun Wah who has set up Fong Shu Fook Tong Foundation and Fong’s Family Foundation in 1977 and 1986 respectively and has so far completed close to 500 donation projects in China, I respond to the calls from the community and government for affordable artist space and space for artists and young entrepreneurs.”

The Group has allocated around 10% of Genesis to support young artists, start-up entrepreneurs and other non-profit making organizations. We have sponsored the Art Development Councils Arts Space Scheme leasing 10,250 square foot at one-third the market rent. Just last week, we have agreed to lease 8,254 square foot to Hong Kong Federation of Youth Groups at the same concessionary rate to help the young entrepreneurs. Moreover, a 2,000 square-foot unit is leased to the Tung Wah Group of Hospitals as a workshop to train young people on professional photography. We foresee Genesis will be a fun-filled office campus that is full of positive energy!
Genesis Offers a true Work-Life Balance Environment

Genesis has a total floor area of 240,000 square foot dividing into 22 floors, with 18 floors of offices, and 4 floors of retail shops. There is a combined 30,000 square feet of Italian designed foyer and Zone DD. Zone DD consists of gym rooms, a dining kitchen,   a children play room for working parents who wants to bring their kids to work temporary, a large green open deck, recreational space, and even shower facilities to  promote a true work-life balance working environment. Zone DD can also host seminars, corporate trainings, cocktail receptions, product launches, art showcases, and other events. In addition, an air-conditioned vertical gallery is planned to allow the display of arts by our tenants for the enjoyment of other tenants and the public. With all the elements above, Genesis is the ideal working campus in Hong Kong’s Island South.

With the target opening date of MTRC’s South Island Line in 2016, it is within 5-minute walking distance from the future Wong Chuk Hang MTR station*, which is only 7 minutes away from Admiralty MTR station*.

About “Genesis”
Located at 33-35 Wong Chuk Hang Road and used to be named as ‘Good Prospect Building’, Genesis is the first industrial building in Wong Chuk Hang revitalized to a commercial building. Under the “Revitalization of Industrial Buildings” measures by the Development Bureau, Hip Shing Hong (Holdings) Co. Ltd. (“Hip Shing Hong”) rejuvenated Good Prospect Building and officially named it as “Genesis” on 26 January 2015. Hip Shing Hong instilled “Genesis” with a lot of design and artistic elements with a strong emphasis on work-life balance, providing excellent work space in the Southern district of Hong Kong.

With the target opening date of MTRC’s South Island Line in 2016, it is within 5-minute walking distance from the future Wong Chuk Hang MTR station, which is only 7 minutes away from Admiralty MTR station .

*Scheduled to be completed in 2016. Source for MTR travelling time: www.mtr.com.hk and www.mtr-southislandline.hk. As the South Island Line (East) is still under construction, the travelling time indicated above is for reference only.